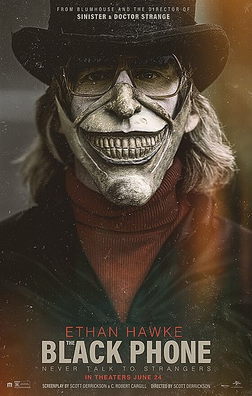 When Finney is taken, now trapped in a soundproof concrete basement, the thrills ramp up quickly. Inside the room is the titular wall-mounted black phone, clearly disconnected, but which receives calls from the previous Grabber victims offering the boy advice to survive.

Despite donning various masks, Hawke conveys menace and uncertainty as the Grabber holds Finney’s fate in his grasp. The ghost messages move the story along, with hope of an escape or a means to fight back.

Meanwhile, Gwen embraces here visions and turns to prayer, reaching out for supernatural assistance and guidance.

Derrickson delivers a highly entertaining, perfectly paced thriller without over-delivering jump scares or false alarms. The town is riddled with likeable and believable secondary characters, but this Mason Thames’ film.

The entire premise relies on the incredible performance of this young actor, who delivers like a seasoned veteran.

As the plans fail or fall just short, the audience is certain to increasingly cheer for the boy and hope for some sort of miracle. In fact, the consuming story distracts viewers from an obvious and rewarding twist.

“The Black Phone” is not overly gross on bloody, relying on the grounded nature of the story, adapted from a Joe Bell short-story. The historical references, Easter Eggs from the late 70s, sets up a rich, immersive environment to showcase a town of broken people trapped in a nightmare.

Derrickson and the cast delivered beyond expectations in a potential sleeper hit of the summer, similar to how “Split” over performed in 2016.

MP Rating: Rated R for violence, bloody images, language and some drug use.