Inside the world’s most popular video game is Guy, played by Ryan Reynolds, and he doesn’t want you to have a good day, but to have a great day. While FREE GUY may not make your day “great,” it certainly can put a smile on your face.

Guy is a NPC, non-player character, a the chaotic violent world called “Free City,” and he is slowly becoming self-aware, seeking the affections of a sexy woman, a “sunglass wearer,” which means she’s a user of the game.

Guy’s routine may remind audiences of “The Lego Movie,” ripe with clichés, bad coffee, repetitive conversations (yes, like “Groundhog Day”), with the same friends and seemingly everyone is playing, or watching (yes, like “The Truman Show”), but there is indeed more.

The violence seems pointless as Molotov Girl (Jodie Comer) turns Guy’s pursuit into a world changing effort to be the “Good Guy” and his new persona, “Blue Shirt Guy,” catches the attention of the world.

Why and how could this happen IS the subplot of the film. 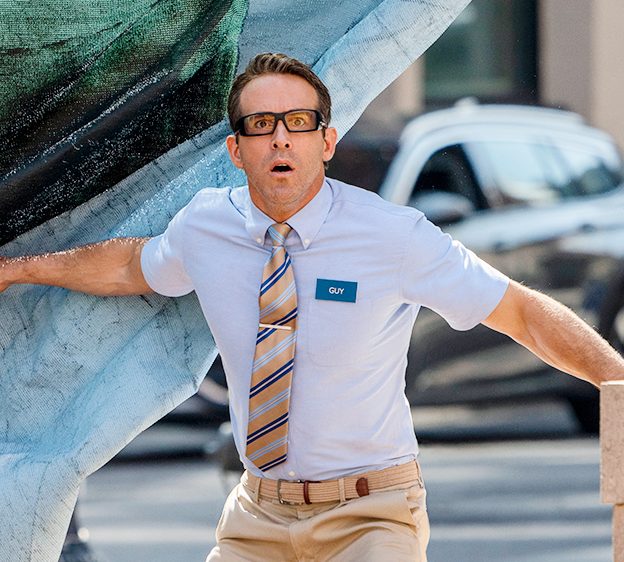 The film may be anti-Big Corporation, but Taika’s zany tech giant villain is more colorful than malicious, never letting the audience slip into a dark, hateful place. Guy and Millie are cutting through the video game chaos, weaving between outlandish interactions and real world problems.

Channing Tatum has a GREAT uncredited cameo as Revenjamin Buttons, with a ton of celebrity voice cameos (Hugh Jackman, Dwayne Johnson) as well as popular streamers and gamers (Ninja, Claymore, Pokimane) keeping a fun “Ready Player One” feel throughout the film with some Marvel and Star Wars fun at the end.

Technically an original film, the story is a bouillabaisse of the aforementioned films with a dash of a dozen others, giving the audience a taste of gamer life. While the result may not be memorable years from now, it will be viewed, and SHOULD be viewed, as a pleasant experience.