Taika Waititi and Marvel Studios should apologize to Jack Kirby, Stan Lee estates, Larry Lieber as well as Walt Simonson, for the tragic representation of Thor in the new MCU film, “Thor: Love and Thunder.”

This is the fourth film in the hero’s journey to “find himself” with Chris Hemsworth returning as Thor Odinson, who is hunting down a serial killer of Gods and battling his emotions for the ailing Jane Foster (Natalie Portman).

Spoilers are at the bottom, proceed accordingly.

“Thor 4” opens with Gorr’s backstory: a father ignored by callous Gods in the wake of his daughter’s death and the devastation to his world. Gorr (Christian Bale) wields a cursed sword, All-Black the Necrosword, to strike down the God and vow to murder all of the Gods in the universe.

Korg chronicles Thor’s life, the events of previous films, offering up a few gags, in the footage scene in the teaser trailers, setting up the Guardians of the Galaxy scene with ignoring the team’s plight in battle and then effortlessly saving the day. Thor receives Toothgnasher and Toothgrinder, a pair of giant Goats which pull Thor’s chariot in the comic book, but are quickly uses for silly jokes and gags.

Thor and the Guardians receives countless distress calls in the wake of Gorr The God Butcher’s murderous rampage. After some pathetic attempts at humor (see below), Thor sets off with Korg to assist Sif, who points him to New Asgard on Earth.

On Earth, Jane Foster is battling stage four cancer and turns to Norse mythology, discovering the healing powers of Mjölnir, Thor’s hammer. Valkryie (Tessa Thompson) rules New Asgard, which has became a tourist attraction rather than a majestic new home for the powerful Asgardians. Jane visits, sees the shards of the original Mjölnir, which find her worthy without explanation.

The CGI battle with Lady Thor and Odinson is interrupted by site gags and a return to Korg narration presumably showcase Thor’s “sensitive” side or set up his buffoonery…the audience can decide.

After Gorr attacks, “King” Valkyrie, who leads her people in distress while wearing a t-shirt and acting irrational or headstrong. The group explains Gorr to the audience, AGAIN, before a floating head appears to make another Guns N’Roses reference and be announced as Heimdall’s son. After a few more jokes to distract from the danger to most of the Asgardian children, Thor seeks out get from Gods, more specifically, Zeus.

As seen in the trailer, Zeus humiliates him. There is pointless fighting with and the showdown with Gorr seems to set up real stakes in between a goofy moment

When Eternity is truly threatened, characters stand around for awhile, chat it up and our hero races headstrong into battle, rallying kids to faceoff against Gorr: “Today is a day that will go down in history….Present arms” and then Thor uses his lightning power to “light them up” – Yes, this happens — Queue more GNR as the children fight.

Taika Waititi uses “Thor: Love and Thunder” as a vehicle to transform Thor into a hypersensitive moron who is incompetent at nearly every turn. Any moment of seriousness or plot is plagued by a useless, inconsequential effort to get a giggle.

Fans and critics usually hold “Thor: Dark World” as the worst of the four Thor films, but Taika Waititi said “Hold my beer” and made “Love and Thunder.” 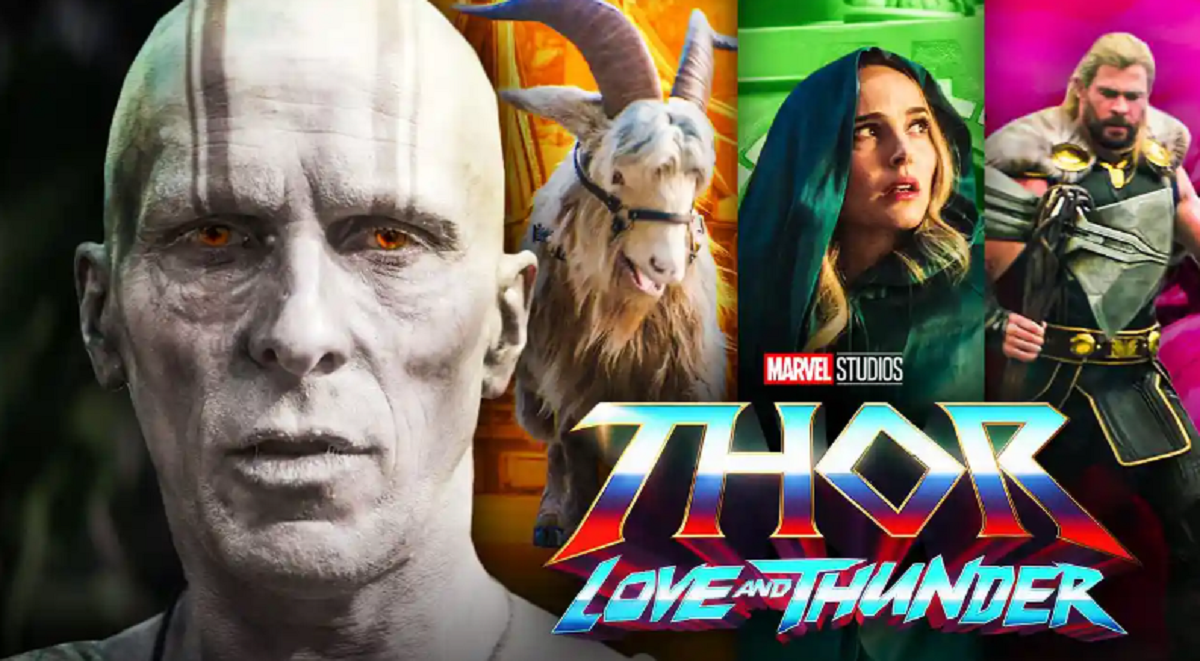 SPOILERS BELOW THIS POINT

Taika’s humor is uncreative, imitating the temperament of “Ragnarok” rather than generating anything authentic to the characters’ personalities. The 90s music is overplayed with Guns N’ Roses T-Shirted kids, references and music thought out the movie.

A stoic Valkyrie stars in cheesy commercials as the Asgardian actors Matt Damon, Sam Neill and Luke Hemsworth (who somehow survived Hela and Thanos), re-enact the events of “Ragnarok” with Melissa McCarthy playing Hela for an audience of tourists.

Tessa Thompson’s uninterested expression never disappears and just as fake audience cheers on mockery, one can fear that audiences will also cheer “Love and Thunder” despite its hollowness and cheap attempts at getting a laugh.

Chris Pratt’s Star-Lord doesn’t seem like the character from previous films, trying to offer decent advice, setting up the “Love” element in the film’s title, but the moment is quickly dispatched for a silly gag, casting aside any of Thor’s gravitas or Quill’s maturity. Fortunately, the staring into the eyes gag from the trailer was cut short to save audiences from that uncomfortable attempt at humor.

Remember when Pratt was the jokester and Hemsworth gave Thor a Shakespearean depth…well, that is abandoned for a cheeky handshake joke with Star-Lord standing around awkwardly.

Like the other Marvel Phase Four films, “Love and Thunder” falls in the category of mediocre and mundane, at least compared to the legacy of the MCU and great films such as “Captain America: Winter Soldier” or “Guardians of the Galaxy.”

“Ragnarok” may have been a fun, outlandish superhero romp, but Taika’s doubling-down on the goofs derailed the attempts to resurrect a Thor worth caring about…He’s more comic relief now than Man.

When Sif is found, she has lost an arm. Thor offers her help, but she rambles about glory and entering Valhalla setting up a Thor joke. Taika appears uninterested in giving characters serious moments to build up their stories and connections to the audience.

Jaimie Alexander deserves better than “Maybe your arm is in Valhalla” and the “let’s return to the story” moment.

Sif returns to teach Heimdall’s son at the end of the film.

TAIKA LOVES HIS OWN VOICE

Korg is voiced by the director and, as any good narcissist would do, breaks away from action or serious storytelling, with a narration filled with cheeky moments to get a laugh. Clearly Taika loves to think he’s making the audience laugh, usually at Thor’s expense.

Thor rollerblading, being afraid during a movie, talking to the hammer directly or “Nick Furry” on Caller ID made Taika laugh at his own joke for sure.

Korg is seemingly killed, but since his head survives, the audience gets to endure Taika making himself laugh several more times in the film.

WHICH GORR IS WHICH?

Bale’s Gorr is menacing and interesting one moment and then a knockoff maniacal version of Joker the next. Taika never commits to the villain, even during the decent shadow battles with Thor, Lady Thor and Valkyrie. Gorr simply grabs Stormbreaker away from Thor walks away.

When Thor arrives later, Gorr hasn’t move ahead with his plan yet…so convenient.

Once again, Marvel can’t commit to making a great villain to build around as Bale’s Gorr appears to be crying, whining, weak and confused at the most inappropriate times.

Gorr attacks New Asgard in the shadows, setting up a battle with Valkyrie at Thor’s side. Nearly everything in the scene is digital and created on the cheap compared to the scale of a battle scene in “Dune.”

Prediction: Viewers who watch this on Disney Plus in a couple of months will struggle to see much of anything.

Even Mjölnir is a Lady now.

Thor whistling, calling out to the hammer, “Come here boy” or “Come to Daddy” as Lady Thor, aka Jane, wields it effortlessly, was such an incredibly cringe moment. Instead of ramping up the intensity in battle scenes, Thor’s helmet wings flip up or Korg cracks another Jane Fonda reference.

Don’t worry kids, it’s Lady Thor, not the real Thor, who has to make the sacrifice to win the battle. Jane has to abandon the power to help Thor defeat Gorr, so just like “Ragnarok,” he’s not the character who “really” defeat the film’s villain.

In fact, Thor has to leave the conflict to retrieve Stormbreaker, which he lost earlier, while Jane faces Gorr directly. By the way, “retrieve” was a poor word choice, since Thor begins by telling the weapon to “Get a hold of yourself” and look at what you’re doing — yes, the arsenal can now be negotiated with…presumably encouraged or discouraged.

Jane debates Gorr over the name, claiming she’s Mighty Thor, before giving up all of the power to defeat Gorr physically so Thor give the villain a “good talking to” about love.

There is literally a statue built to honor Jane as Korg narrates about her being the TRUE hero of the film…sorry Chris Hemsworth, you’re not the title character in case that was ever in doubt.

Those goats were cool in the comic books, just saying.

What is the name of…?

Thor uses Zeus’ lightning bolt to energize a bunch of children to battle the shadow creatures as GNR plays. One little girl in a ballerina outfit cuts one down and the level of stupid gets ramped up over eleven.

So, “Love and Thunder” could have been 20 minutes shorter if Thor had done this earlier with Jane and Valkyrie, two trained adults, instead of using an “army” of kids.

Heimdall’s kid, now wanting to be called Axel, saves the children with Stormbreaker.

Kind of…after the “getting your rocks off” story earlier in the film, Korg reveals at the end of the film he finally regenerated and found a dude to move on with.

Thor ends the picture right where you’d expect: in the kitchen, wearing a pink apron, cooking for Gorr’s daughter, who is a violent disrespectful punk of a child.

Remember to laugh, especially when it’s revealed that she painted on Mjölnir.

Jane may not be dead, Zeus is NOT and dispatches Hercules to kill Thor, so Marvel threw some breadcrumbs to their Marvel Stans.

Why was Jane worthy? Why would Jane get to go to Valhalla? Don’t think about it, just accept it.