Amoeba Awareness billboards on I-4 in Central Florida

Amoeba-Season.com, a project of the USF Foundation Philip T. Gompf Memorial Fund & USF Health and the Jordan Smelski Foundation for Amoeba Awareness teamed up as summer is upon us in Florida to promote awareness with two digital billboards on I-4 in Central FL, 40,230 times per side per month. 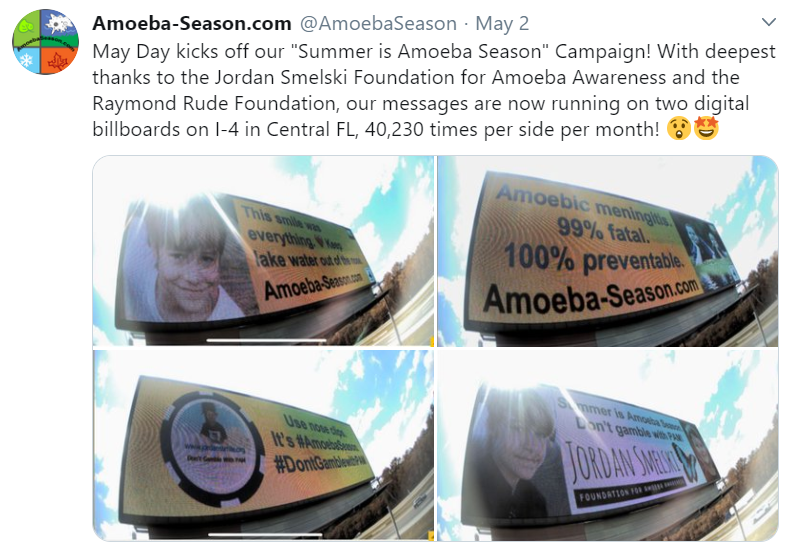 Despite the global COVID-19 pandemic and the fact that amoebic meningitis seems like the last thing on anyone’s mind, the organizations want to remind the public it is 99% fatal and 100% preventable.

Naegleria fowleri  is a microscopic amoeba which is a single-celled living organism. It can cause a rare and devastating infection of the brain called primary amebic meningoencephalitis (PAM). The amoeba is commonly found in warm freshwater such as lakes, rivers, ponds and canals. Infections can happen when contaminated water enters the body through the nose. Once the amoeba enters the nose, it travels to the brain where it causes PAM (which destroys brain tissue) and is usually fatal. Infections usually occur when it is hot for prolonged periods of time, which results in higher water temperatures and lower water levels.

Most infections occur from exposure to contaminated recreational water. Cases due to the use of neti pots and the practice of ablution have been documented. You cannot be infected with Naegleria fowleri by drinking contaminated water and the amoeba is not found in salt water.

Of the some 150 cases reported in the US since 1962, about half have been reported in Florida and Texas.

We do not know how to lower natural Naegleria fowleri levels in lakes and rivers. People should assume that there is always a low level of risk of Naegleria fowleri infection whenever they enter warm freshwater lakes, rivers, and hot springs, especially in southern-tier states.

The only certain way to prevent an infection when swimming is to avoid water-related activities in warm freshwater.

If you choose to swim, limit the amount of water going up the nose, and avoid water where Naegleria fowleri might live.

The digital billboard campaign runs May to August each summer.