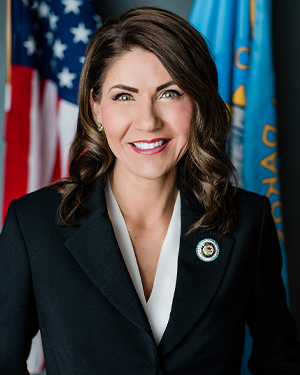 FreedomFest 2021 came to a conclusion and one of the biggest responses was from the first night: South Dakota Gov. Kristi Noem.

Noem welcomed the audience to the “only state in the union” to NOT have shutdowns, shelter in place orders, mask mandates, businesses deemed essential or nonessential, because “I don’t think Governors have authority” to do these things, prompting praise from the crowd.

“Now in South Dakota, our state motto is ‘Under God the People Rule’ and that is what we believe and what we do every single day here,” Gov. Noem said next.

“I want you to know that the people of South Dakota are happy, and they’re happy because they’re free,” Noem said.

Noem introduced her husband and some key members of the cabinet/staff.

“We’re kind of a laid-back crew here in South Dakota,” Noem said. “Have you noticed that we’re just normal, everyday people who appreciate a wonderful way of life?”

Check out the video clip below.

Noem benefits from a roaring economy. She says there are fewer than 2,500 South Dakotans on public assistance and 28,000 job openings. The state has no state income tax. Property taxes average 1.22 percent.

Annual economic growth is 9.9 percent, among the nation’s best. Houses are inexpensive relative to many other places. With such figures it’s no surprise there’s been a population growth of 8.9 percent since 2010.

“When you wake up every single morning, I just want to ask you to do one thing: I want you be happy. You woke up this morning in the United States of America. You are better off than 99% of the people across the world just because you woke up right here in this country,” Noem said. “I will do all that I can; you need to do all that you can to make sure that we protect [America] for our kids and grandkids.”

Noem said having a seat at the table is “more important than ever” because the people who take action are changing America. She asked the crowd to continue to show up and remember how special the country is because the United States needs them.

“It feels like we’re outnumbered, but we’re not. And we’re on the right side of history,” she said.

2021-07-30
Previous Post: ‘A Quiet Place 2’ continues the silent tension in a smart, fast-paced sequel
Next Post: DOJ vs FDA: Vaccine mandates vs Emergency Use Authorization and the right to REFUSE THE VACCINE