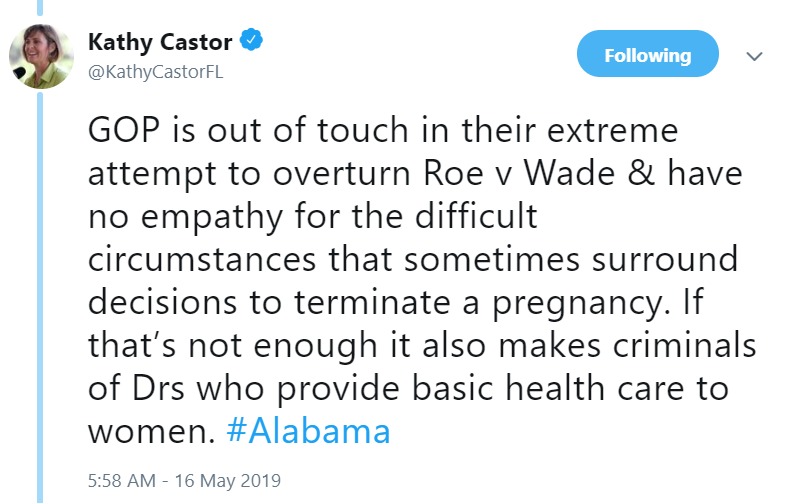 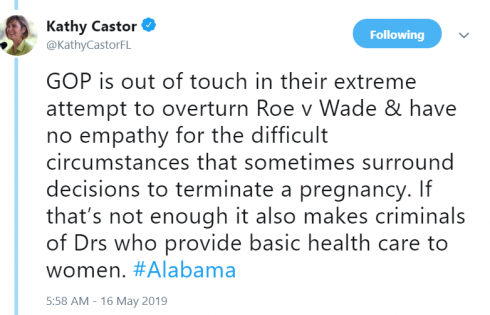 The law bans abortion for any reason other than to “avert (a mother’s) death or to avert serious risk of substantial physical impairment of a major bodily function” (mental or emotional health would not qualify).

How much disdain do they have for women to say that if you are raped that you must give birth?! We will not allow them to roll back a generation of progress for women and their families – we must and we will fight back.

GOP is out of touch in their extreme attempt to overturn Roe v Wade & have no empathy for the difficult circumstances that sometimes surround decisions to terminate a pregnancy. If that’s not enough it also makes criminals of Drs who provide basic health care to women.

I fear for & stand w/#Alabama women in opposing outrageous violations of the right to make personal health care decisions. I trust women, families & their Drs. to make decisions relating to family planning & reproductive health, not male politicians who want to control our bodies

Stand up for women! I stand with #Alabama women in opposing this violation of the right to make personal health care decisions. We can’t allow them to roll back our hard-won progress for women and their families! Add your name

In the 2018 election cycle, Rep. Castor received $1,000 in contributions from Planned Parenthood.