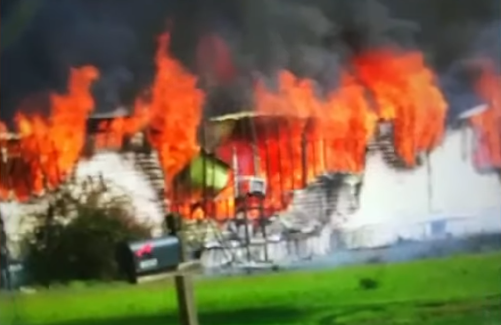 Pasco County Sheriff’s Office are reporting that a mobile home fire in Florida, killing Cynthia Brace, was deliberately set by the woman’s husband, Edward Brace, as part of a murder suicide scheme.

Cynthia Brace, 61, died in the March 3 blaze at 5916 Penny Royal Road, while her husband Edward Brace, 55, died at a local hospital from the severe burns of the blaze.

Detectives detailed how Edward was caught on video buying gas cans and fuel the morning of the fire, walking from the mobile home to the shed after the flames started and ignited a fire there as well.

Firefighters found Edward in that shed.

Samples from his clothing and inside the home tested positive for gasoline, according to the Sheriff’s Office.

Police added that the couple was experiencing domestic issues.

“It’s a heartbreaking day,” Pasco Fire Rescue spokesperson Corey Dierdorff back said on March 3. “Every one of us got into the fire service to try and save lives and when the fire is so intense that you can’t get in there, it’s something that every one of these individuals who are on scene here today is taking it heavily. It’s a very somber scene down there.”