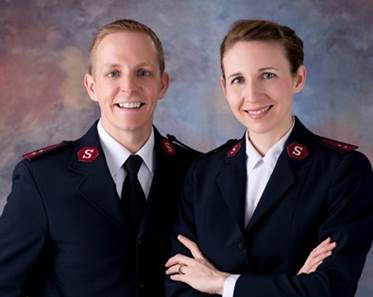 Combining Millennial youth with a level of experience that comes from being a sixth generation officer in The Salvation Army, The Salvation Army of Tampa/Hillsborough County is very excited about their new leadership team.

Captain Dr. Andy Miller III, 36, and his wife Captain Abby officially assumed their new assignment as Area Commander and Associate Area Commander merely a week ago, but already a burst of optimism and energy flood the halls of the organization.

“We are excited to lead this Command at this important moment,” said Captain Miller.  “While we face many changes, there are several constants: our strong faith in God, a dedication to be of service to all those in the greatest need without discrimination, and the knowledge that through Christ all things are possible.”

“There are many unknowns ahead,” said Advisory Board Chairman Jeff Armstrong. “But both the board and staff are both excited and inspired by the energy and optimism Andy and Abby are bringing to their new roles.”

While he’s the youngest Area Commander in The Salvation Army, Captain Andy Miller is a sixth generation officer, for whom the organization has been home all his life.  Working in The Salvation Army for 14 years, he has been officer for nine years. Most recently he was the leader of one of the largest Salvation Army congregations in the USA Southern Territory and has completed two building campaigns in the his nine years of service.  He is an effective fund developer and fiscal manager who grew the Arlington, Texas Salvation Army budget from $600K to $2.6 million in five years, and the Gwinnet, Georgia Salvation Army’s budget from $1.6 million to $2.5 million in two years. During that time, he nurtured an important relationship with the Dallas Cowboys and members of the Jerry Jones family.

He is the author of two books, Stay the Course: Challenges to Salvationists from the Book of Acts (2016) andHolistic Hospitality: A Bridge to a Future Army (2015) and has written articles published in academic journals such as the Wesleyan Theological Journal, Word and Deed, and The Journal of Aggressive Christianity to name a few.

Captain Miller was the National Spokesperson for The Salvation Army’s disaster response to Hurricane Ike in 2008.

The Captains Miller replace Major James “Chip” Hall and his wife Major Leisa Hall, who have accepted a new assignment with The Salvation Army in the Washington, D.C., area.

“With great enthusiasm and optimism, we welcome Captains Miller to The Salvation Army Tampa Area Command and look forward to innovative and effective service delivery programs to meet the changing needs of our community,” said Armstrong.

About The Salvation Army

The Salvation Army, an evangelical part of the universal Christian church established in London in 1865, has been supporting those in need in His name without discrimination for 150 years in the United States. Nearly 30 million Americans receive assistance from The Salvation Army each year through the broadest array of social services that range from providing food for the hungry, relief for disaster victims, assistance for the disabled, outreach to the elderly and ill, clothing and shelter to the homeless and opportunities for underprivileged children. 82 cents of every dollar The Salvation Army spends is used to support those services in 5,000 communities nationwide. For more information on the services offered at the Tampa Area Command, go to www.salvationarmytampa.org.