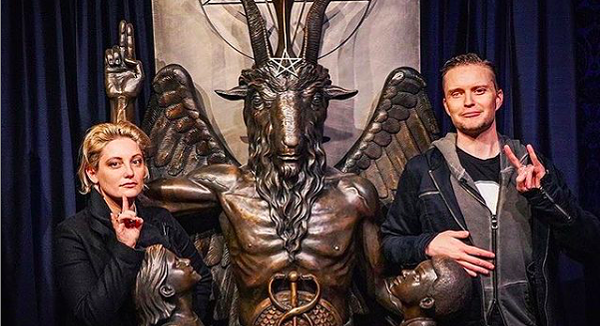 Satanic Temple to fight Texas abortion law, against their religion

The Satanic Temple joined the fight against the Texas abortion law, objecting on religious grounds.

“Consistent with our tenets that call for bodily autonomy and acting in accordance with best scientific evidence, The Satanic Temple, based in Salem, religiously objects to many of the restrictions that states have enacted that interfere with abortion access,” the religious group’s website says.

TST’s attorney sent a letter to the Texas Health and Human Services Commission on behalf of “Ann Doe,” which demanded an exemption from the abortion restrictions on behalf of Doe.

“The abortion ritual (1) requires an abortion; and (2) affirms her religious subscription to TST’s Third and Fifth Tenets. But before Ms. Doe can get her abortion–and therefore participate in the abortion ritual–the government has required that she get a sonogram… [ These ] requirements substantially interfere with Ms. Doe’s religious beliefs and practices for two reasons. First, the requirements are a precondition to Ms. Doe’s ability to participate in a religious ceremony. It is a substantial interference per se for the state to place a regulatory hurdle–one that costs money–in front of a religious exercise. The state might as well tax and regulate Mass.”

Greaves says, “I am sure Texas Attorney General Ken Paxton, who famously spends a good deal of his time composing press releases about Religious Liberty issues in other states, will be proud to see that Texas’s robust Religious Liberty laws, which he so vociferously champions, will prevent future Abortion Rituals from being interrupted by superfluous government restrictions meant only to shame and harass those seeking an abortion.”

The founder describes TST as a nontheistic religious group. “By nontheistic we mean we don’t worship a literal deity. We view Satan as a metaphorical construct as the ultimate rebel against tyranny,” said Lucien Greaves, founder.

“We’ve encountered one argument of “Well abortions aren’t religious.’ Well that is not necessarily the case, the question of whether something is religious or not is up to the person who is bringing the lawsuit,” said Matthew Kezhaya, the attorney for TST.
“By regulating the context in which the ritual happens you’re basically regulating the ritual itself. If I say nobody can buy wine, well that is affecting the Catholics’ ability to do mass,” said Kezhaya.
2021-09-09
Previous Post: HHS funded horrific fetal tissue experiments: Babies aborted alive, tissue harvested, then killed
Next Post: Tampa: Glib Oleksandr Ivanov-Tolpintsev extradited to Ukraine for hacking, stealing logins, selling them on the Dark Web