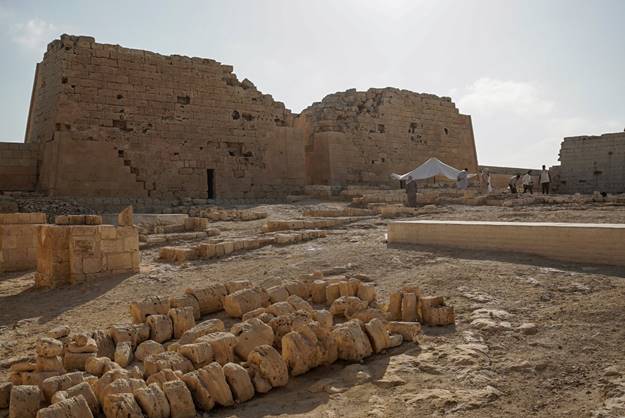 Cleopatra was the last queen of Egypt, an icon of popular culture and one of the most elusive yet significant female figures in history. But who was the woman behind the prolific image? In an all-new Science Channel special, CLEOPATRA: SEX, LIES AND SECRETS, experts seek out the latest groundbreaking archaeological research to unravel the mystery behind this elusive Egyptian queen. The 2-hour special premieres Sunday, June 21 at 8 pm ET/PT on Science Channel.

Once the ruler of one of the greatest empires in the world, Cleopatra is synonymous with seduction, beauty and scandal. But despite being a prolific figure throughout history, details about her life remain largely unknown.

In Egypt, on the edge of the Nile delta, a massive archaeological dig is underway as experts search for the tomb of Egypt’s most famous pharaoh. A new theory about Cleopatra’s burial ground introduced by archaeologist Dr. Kathleen Martinez, suggests her tomb may be found in a place known as Taposiris Magna. Built over 2,000 years ago, the grounds of Taposiris Magna are honeycombed with hidden passages and tombs. When experts astonishingly uncover an undisturbed tomb decorated in gold leaf, it could be the answer to the 2,000-year-old mystery of Cleopatra’s final resting place.

The special will follow experts’ meticulous archaeology and the cutting-edge technology to reveal the secrets of Cleopatra’s life. Their findings revolutionize our understanding of who she was and how she lived.

CLEOPATRA: SEX LIES AND SECRETS is produced for Science Channel by Arrow Media, Handel Productions and Rezolution Pictures. It is Executive Produced by Lucie Ridout for Arrow Media, with Tom Brisley as Creative Director; with Executive Producers Alan Handel for Handel Productions and Catherine Bainbridge for Rezolution Pictures. For Science Channel, Neil Laird is executive producer.

About Science Channel
Science Channel, a multi-media business unit of Discovery, Inc. is the home of all things science around the clock, including series such as MYTHBUSTERS, OUTRAGEOUS ACTS OF SCIENCE, WHAT ON EARTH?, HOW THE UNIVERSE WORKS, UNEARTHED, and MYSTERIES OF THE ABANDONED. Science Channel’s programming also includes timely, expert-driven specials covering breaking science news and discoveries. Science Channel is the premiere TV, digital and social community for those with a passion for science, space, technology, archeology, and engineering, providing immersive, engaging, high-quality entertainment across all Science Channel assets including: Science Channel television network, available in more than 63 million homes in the U.S; complimentary Video On Demand offering; SCI Go app allowing viewers to catch up on full episodes of their favorite shows anytime; deep video, interactive storytelling and virtual reality at www.sciencechannel.com; and conversations on Science Channel’s popular social platforms including Facebook, Twitter, Instagram and Snapchat via @ScienceChannel.

About Discovery
Discovery, Inc. (Nasdaq: DISCA, DISCB, DISCK) is a global leader in real life entertainment, serving a passionate audience of superfans around the world with content that inspires, informs and entertains. Discovery delivers over 8,000 hours of original programming each year and has category leadership across deeply loved content genres around the world. Available in 220 countries and territories and nearly 50 languages, Discovery is a platform innovator, reaching viewers on all screens, including TV Everywhere products such as the GO portfolio of apps; direct-to-consumer streaming services such as Eurosport Player, Food Network Kitchen and MotorTrend OnDemand; digital-first and social content from Group Nine Media; a landmark natural history and factual content partnership with the BBC; and a strategic alliance with PGA TOUR to create the international home of golf. Discovery’s portfolio of premium brands includes Discovery Channel, HGTV, Food Network, TLC, Investigation Discovery, Travel Channel, MotorTrend, Animal Planet, Science Channel, and the forthcoming multi-platform JV with Chip and Joanna Gaines, Magnolia, as well as OWN: Oprah Winfrey Network in the U.S., Discovery Kids in Latin America, and Eurosport, the leading provider of locally relevant, premium sports and Home of the Olympic Games across Europe. For more information, please visit corporate.discovery.com and follow @DiscoveryIncTV across social platforms.