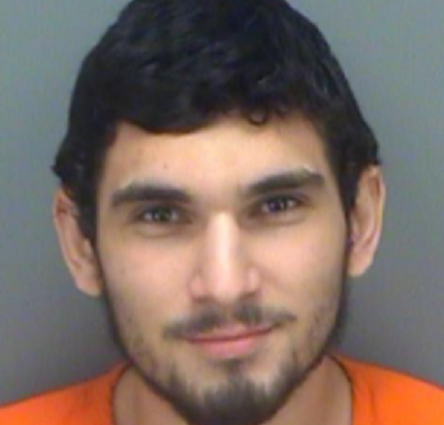 A Tampa man, Muhammad Al-Azhari, is being indicted for assisting Islamic State of Iraq and Syria (ISIS) and violating the U.S. firearm laws.

Al-Azhari, 23, charged with attempting to provide material support or resources to a designated foreign terrorist organization, Islamic State, and violating the National Firearms Act, a ccording to the U.S. Department of Justice (DOJ).

The DOJ explained that Al-Azhari had previously acquired a Glock pistol and a silencer and had “expressed admiration for Pulse nightclub shooter Omar Mateen” and was looking to “carry out a similar mass casualty shooting.”

Officials revealed that he Googled “Bayshore Boulevard” and “busy beach.” One day, he drove out to Honeymoon Island in Dunedin, then turned around and drove straight back to Tampa.

His Google Maps history revealed searches for “busy beaches,” “Bayshore Blvd,” “Belleair Beach,” and “Clearwater Beach,” as well as “FBI,” and “central intelligence.”
The FBI said Al-Azhari filmed a mock rehearsal of himself carrying out a massacre: “Hey you, get on the floor. Get on the floor now. Don’t you move, don’t you move, I’m telling you, I will kill you,” he said in the April 30 cell phone video that FBI agents said they obtained. He was wearing a mask and holding a weapon that agents believe was the Uzi. “This is revenge for my brothers.”

He was accused of planning to travel to Syria to participate in jihad and join terrorist groups fighting the Syrian government.

He served three years in Saudi Arabia and was removed to the United States in 2018.

Just days after his May 2020 arrest, Heba Al-Azhari, his sister attacked a Temple Terrace police officer with a large knife and was shot in killed.

“The one thing I want people to know is that A. they are safe, and B. the Joint Terrorism Task Force here at the FBI, with our partners, we’re here to protect them, and that’s our mission, what we’re here to do. We work 24 hours a day 365 days a year to make sure that they’re safe, and to go about their life so that we can continue to do our job here,” said Michael McPherson, Special Agent in Charge of the Tampa FBI Field Office.

McPherson also said threats of violence come in every day, but they work constantly to investigate them. Still, they urge the public, that if something seems out of the ordinary, say something.

Al-Azhari faces a penalty of 20 years in federal prison.

“We are working every day to protect our communities at all costs. It’s disturbing to think of the actions Muhammed Momtaz Al-Azahari may have been able to carry out had it not been for our coordinated efforts.

I commend our federal, state and local partners in law enforcement whose hard work resulted in this arrest and charge. By working together, we are sending a strong message that terrorism of any kind will not be tolerated in Hillsborough County or our great country as a whole.”