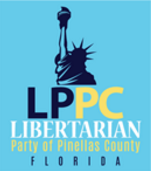 U.S. Senate Libertarian candidate Paul Stanton will address the members. Stanton is in an unprecedented (for Florida) Libertarian Primary Election race with Augustus Invictus. The election will be held Aug. 30 to see which LPF candidate moves on to the November general election to try to unseat current U.S. Senator Marco Rubio.

The Stanton‐Invictus primary is one of only three LP primary contests to be held nationwide for either a U.S. Senate or U.S. House seat. Missouri will have a primary for one of its two U.S. Senate seats, while Alaska has one of its U.S. House contests in an LP Primary. In all, the Libertarian National Committee reports that 565 Libertarian candidates will run this year in contests ranging from local to state to national elections—including Gov. Gary Johnson and Gov. Bill Weld for President and VP.

An official endorsement vote is expected to follow Stanton’s presentation to the LPPC. Stanton has also been endorsed by four Libertarian affiliates in Broward County, Collier County, Volusia County and on July 20 was most recently endorsed by the Northwest Florida affiliate based in Pensacola. While at the LP National Convention in Orlando, Stanton was also endorsed by five of the top six Libertarian candidates for President of the United States—including the Johnson‐Weld campaign.

The LPPC affiliate will also hold an election for its Vice‐Chair position, with Jess Mears, Nick Zoller and Max Dickstein all entering their names for consideration. The meeting will begin at 7 p.m. with the agenda and is expected to have Stanton speak immediately following. A vote to endorse will follow.

The Libertarian Party of Pinellas County has more registered Libertarians than any other affiliate in the state. At last count there were nearly 30,000 registered Libertarians in Florida, but that number is rising rapidly with the political climate around the country—specifically in the race for the White House. The Johnson‐Weld ticket is already in the double digits in many polls and within striking range of the 15% threshold to be including in the debates.

“We’ve been getting an enormous amount of interest in our party,” said Stacey Selleck, Membership Director of the LP in Pinellas County and is also on the Executive Committee representing the state’s largest LPF Region 8. “We have a ton of people jumping ship from the parties who are saying they were always closet Libertarians. They’re politically homeless. We need to give them a home.”