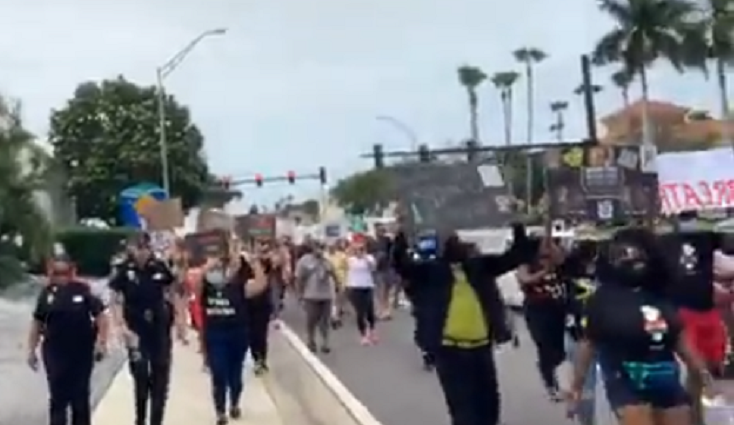 As protests and rallies occur all over the country, Bradenton and Palmetto citizens came out to support George Floyd, speaking out against police brutality and calling for justice.

“The human race has to come together and be one,” said Charles Taylor, a pastor at Mount Raymond Full Gospel Baptist Church.

Small groups moved from Bradenton to Palmetto as politicians were present to speak out.

“I know we’re discussing body cameras, which will be a large outlay of cash for the county and with the pandemic cash is going to be short this year, but it’s probably going to be important,” said Priscilla Trace, Manatee County Commissioner.

ABC blamed smaller crowds on the weather: “The crowd was a bit smaller than expected because of the storms, but their message was still big. They are calling for police brutality to end.”

“This is very personal. To me. To my city. It’s up to me to stand up for the next generation that comes after us,” Takila Hayes told the news channel.

“There are still police officers in Manatee County that have not been charged. Justin’s family still has not gotten justice. That’s what I’m advocating for. I’m advocating for justice. I want young black males and young black females and Hispanics to be able to walk down the street or take a jog and not be scared that they’re going to get shot,” Hayes said.