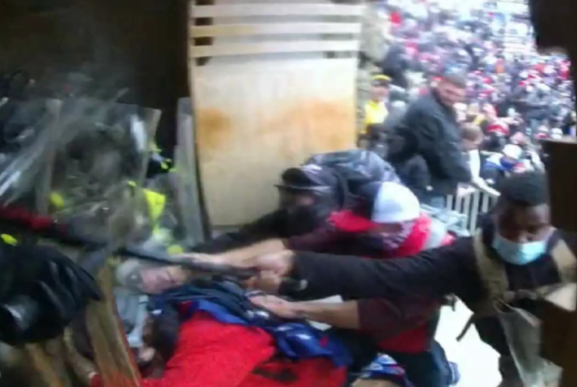 A D.C. man, a New Jersey man, and a Colorado man appeared today in United States district courts on charges stemming from their attacks on local and federal law enforcement officers, as well as other crimes, during the riots at the U.S. Capitol on January 6 that disrupted a Joint Session of the U.S. Congress in the process of affirming Presidential election results.

JACKSON: “I’m not here for Trump!”

He then said he didn’t vote because “I thought my vote didn’t count, but I learned a lesson, and I will vote next in the midterms and in other elections.”

Fairlamb is a gym owner, angry about the lockdown and wanted to defy Gov. Murphy.

Murphy “overstepped his boundaries” in ordering closures,” he told reporters last year as the lockdowns began.

Jeffrey Sabol, 51, of Colorado, was charged by criminal complaint with one count of obstructing, impeding, or interfering with any law enforcement officer during the commission of a civil disorder which in any way obstructs or delays the conduct or performance of any federally protected function, in violation of Title 18, United States Code, Section 231(a)(3).

Sabol confessed to dragging a police officer to be viciously beaten by another man with a flagpole bearing an American flag, a prosecutor said.

The man had tried to commit suicide after the riot and also bought a plane ticket from Boston to Zurich, Switzerland to elude police.

The affidavit in support of the criminal complaint against Jackson alleges that on January 6, Jackson joined a large group of rioters as they attempted to break through the barricaded doorway of the Senate Wing entrance on the west side of the U.S. Capitol building.  Video surveillance footage captures Jackson making a fist and repeatedly striking a U.S. Capitol Police officer while attempting to enter the building forcefully. The mob that Jackson joined pushed through and gained entrance to the Capitol building moments later.  Later that same day, Jackson was again outside the Capitol building at the West Terrace entrance. He joined a violent and aggressive crowd that continued to try to break through a large group of police officers.  Video footage shows Jackson wielding a metal baseball bat and repeatedly and forcefully striking a group of U.S. Capitol Police and Metropolitan Police Department officers in an attempt to break through.

The affidavit in support of the criminal complaint against Fairlamb alleges that as uniformed members of the Washington, D.C., Metropolitan Police Department arrived at the Capitol to assist the U.S. Capitol Police in restoring order on January 6, Fairlamb shoved and punched an officer on the West Front of the Capitol.   In addition to the officer’s account of the assault, the body-worn camera footage of the officer and video footage taken by a civilian witness depict Fairlamb – dressed in a brown camouflage jacket, black knit hat, blue jeans, and bright red shoes – as he assaults the officer.

According to the affidavit, additional video footage shows Fairlamb standing on scaffolding erected on Capitol grounds at the western front face of the Capitol building; picking up from the ground and placing under his arm a baton, just after the skirmish line on the Capitol West Terrace was breached and putting it under his arm; and leaving from inside the Capitol building, coughing, after chemical agents were deployed inside.  The affidavit also alleges that in a video post to his Facebook account, Fairlamb, carrying a collapsible baton like the one depicted in video in which he appears at the Capitol, remarks, “What Patriots do? We [expletive] disarm them and then we storm [expletive] the Capitol.”

The affidavit in support of the criminal complaint against Sabol alleges that on January 6, Sabol was part of a group that grabbed a Metropolitan Police Department officer from the post where he guarded against access to the interior of the Capitol building and dragged him down the exterior stairs.  Sabol and the other individuals, the affidavit alleges, then forced the officer into a prone position on the stairs and proceeded to strike the officer, forcibly and repeatedly, in the head and body with various objects.  Sabol, according to the affidavit, is depicted in a photograph and numerous videos wearing a tan-colored jacket, black helmet, green backpack, and black gloves, and can be seen in a photograph holding an instrument believed to be a police officer’s baton across the police officer’s lower neck while his left hand is pressed to the backside of the officer.  When pulled over by police in New York State based on reports of erratic driving, a bloodied Sabol stated, “I am tired, I am done fighting[,]” “[m]y wounds are self-inflicted[,]” “[I was] fighting tyranny in the DC Capital [sic],” and “I am wanted by the FBI[.]”  Sabol later admitted that he was at the U.S. Capitol and that he was wearing a brown jacket, a black or grey helmet, a big green backpack, and black gloves.  A brown jacket like the one Sabol is wearing in the photograph and videos was recovered from his vehicle, according to the affidavit.

A criminal complaint is a formal accusation of criminal conduct for purposes of establishing probable cause, not evidence of guilt. A defendant is presumed innocent unless proven guilty.

The ATF and FBI continue to urge the public to report suspected use of explosive devices, or violent, destructive acts associated with the recent unrest. Anyone with information can call 1-888-ATF-TIPS (1-888-283-8477), email [email protected] or submit information anonymously via ReportIt.com.

The FBI is looking for individuals who may have incited or promoted violence of any kind. Anyone with digital material or tips can call 1-800-CALL-FBI (800-225-5324) or submit images or videos at fbi.gov/USCapitol.

2021-01-24
Previous Post: Great Barrington Declaration: ‘Government messaging has become progressively hyperbolic and confusing’
Next Post: President Biden: ‘There is nothing we can do to change the trajectory of the pandemic’