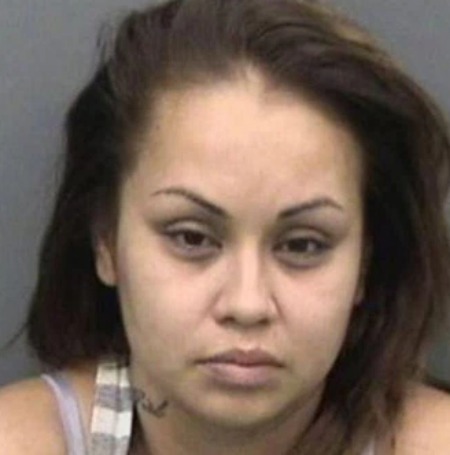 A wrong-way driver, who caused a traffic crash, had a toddler in the car, Hillsborough sheriff’s deputies said. Identified as Crystal Lynn Palacios, the Ruskin woman was charged with DUI, her third in the last ten years, driving while license suspended or revoked (2nd offense) and refusal to submit to any DUI test with previous refusal. Deputies said other charges are pending.

Deputies in an unmarked Ford F-250 pickup witnessed Palacios, 31, in her sedan driving southbound in the northbound inside lane of 50th Street S.  In fact, the deputies said they swerved to avoid colliding with the sedan.

The HCSO pickup actually struck a smaller pickup with the passenger rear corner of their truck evading the drunk woman. The deputies then stopped and checked on that driver before making a U-turn and catching the sedan was she approached the intersection of 50th and Causeway Boulevard. They stopped the sedan and noticed the driver,

Palacios showed several signs of impairment and deputies saw a small toddler in the car. An officer from the department’s child protective investigations division took custody of the baby, deputies said.

Palacios was subsequently arrested for DUI.

Palacios has multiple suspensions to her Florida driver’s license for prior DUI offenses, as well as several non-extraditable warrants from other jurisdictions, deputies said.

For information about the Hillsborough sheriff, go to hcso.tampa.fl.us.