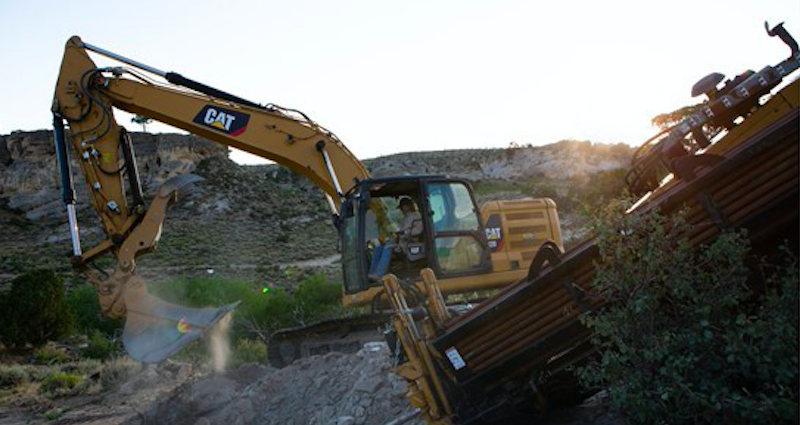 Mystery at Blind Frog Ranch is a new TV series on Discovery Channel following Chad Ollinger as he explores his Utah ranch, seeking answers to where the land just seems different on Blind Frog Ranch.

The ranch, Ollinger says his father Duane originally purchased with other investors, is believed by local residents to be cursed, with bizarre terrain and several mysterious stories.

“…to my dad he has never been on a project that he hasn’t finished, so the drive is to complete what he set out to do,” explains Ollinger about his drive to solve the mystery. “He has lost a lot to finish this project, and my objective is to help my dad. I am always up for an adventure, and to explore for buried treasure is like every kids’ dream to get to do with their dad!”

After a debut on New Year’s Day, Discovery+ delivers a new series exploring the land nearly adjacent to Skinwalker Ranch in Utah, another area notorious for paranormal sightings and other mysterious activity.

The show is summarized this way: “Blind Frog Ranch has drawn treasure seekers for hundreds of years. And now, Duane Ollinger has sunk everything he has in hunting for what he believes is a vast fortune of gold in the ground. But with each step Duane takes closer to finding the treasure, the land seems to hold on tighter, stopping him in his tracks.

“With his money, resources and reputation on the line, Duane is hellbent on finding the truth and uncovering the treasure – no matter the cost. So, this year, he’s going all in and bringing on a team of people to help him: his son, Chad Ollinger, friend and retired Sheriff’s Deputy, Charlie Snider, and Eric Drummond, a renowned geologist who will help him map the faulted land. Duane and his crew will pull out all the stops – and heavy machinery – to find the treasure buried beneath Blind Frog Ranch, even if the land fights them every step of the way.”

“I believe the legends of buried treasure that I have heard from the locals. It’s either gold from the Aztecs or Spaniards. The data I have seen from the satellite scans just confirms that gold is radiating from the caverns.”

Mystery at Blind Frog Ranch can be viewed on the Discovery GO app. Viewers can join the conversation on social media by using the hashtag #BlindFrogRanch and follow Discovery on Facebook, Instagram, and Twitter for the latest updates.