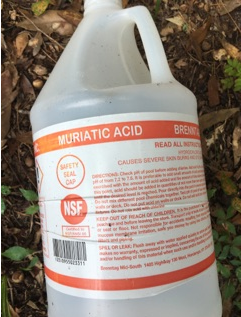 In early October, Augustin drove to a wooded area located near Foxworth Road and Camden Field Parkway in Riverview and illegally dumped approximately 300 cubic feet of debris. Among the debris were two boxes marked “corrosive,” which contained nine 1-gallon containers of Muriatic Acid.

In addition, construction materials, seven 5-gallon buckets of paint and 15 bags filled with leaves were among the debris dumped at the property.

Augustin was arrested on October 25 and charged with Felony Littering (over 100 cubic feet).

“If the acid irresponsibly left in this wooded area had spilled into the soil, it would have had a tremendous environmental impact and left the county and its taxpayers with an even larger clean up cost,” said Sheriff Chad Chronister. “I commend our Environment Enforcement and Code Enforcement Units for not only cleaning up the mess carelessly left behind, but also following through with this investigation until they found and arrested the person responsible. Illegal dumping will not be tolerated in Hillsborough County.”