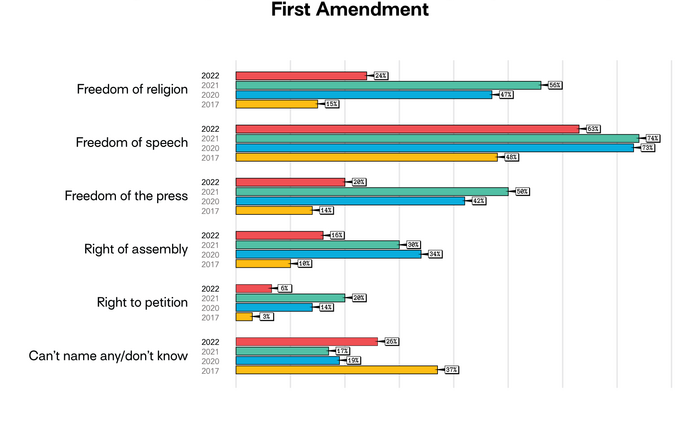 The Annenberg Public Policy Center’s annual, nationally representative US civics survey, to be released Saturday, or Constitution Day, found the first drop in six years among those who could identify all three branches of government and declines among those who could name the First Amendment rights, among other questions.

“When it comes to civics, knowledge is power,” said Kathleen Hall Jamieson, director of the Annenberg Public Policy Center of the University of Pennsylvania. “It’s troubling that so few know what rights we’re guaranteed by the First Amendment. We are unlikely to cherish, protect, and exercise rights if we don’t know that we have them.”

Some of the survey highlights include:

For example, more details on the five freedoms guaranteed by the First Amendment, we find:

When asked unprompted to name the protections specified in the First Amendment, the number of respondents who could identify them declined, at times steeply:

The Annenberg Civics Knowledge Survey is released by APPC for Constitution Day, which celebrates the signing of the Constitution on Sept. 17, 1787.

MITCH MCCONNELL INITIATED A BILL TO REPEAL THE 22ND AMENDMENT? IT IS TRUE!