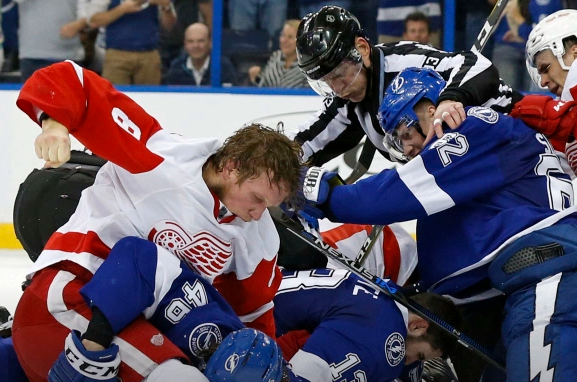 With under a minute to go in Game 2, and with the Red Wings down 5-2, animosity that was brewing in Game 1 turned into an all out melee on the ice when the Wings Brad Richards slashed Andrej Sustr.

What began as indiscriminate punches and players trading blows quickly became chaos when forward Justin Abdelkader went crazy on the Lightning’s Mike Blunden, punching him repeatedly even as Blunden was down on the ice. Check out the video below.

Abdelkader was assessed a game misconduct and left the ice for the beating on Blundin’s head. Thirteen other additional penalties were also handed out.

HockeyFights.com and Yahoo Sports both report that fighting in hockey is at the lowest point since 1968.

Punching a guy repeatedly while he’s down doesn’t tend to leave a good impression.

Asked if he expects there to be any retaliation in Game 3 for Abdelkader punching Blunden, Cedric Paquette responds “probably” #TBLightning

According to reporters, Blunden received 9 stitches after the fight.

The series heads back to Detroit for Game 3 on Sunday with Tampa Bay leading 2-0.