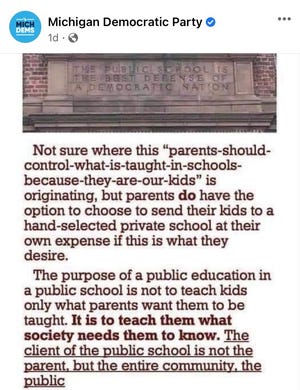 The Michigan Democratic Party has deleted a weekend Facebook post that removed the parental role in public school curriculum and having input in content, because the “client of the public school is not the parent, but the entire community, the public.”

“Not sure where this ‘parents-should-control-what-is-taught-in-schools-because-they-are-our-kids’ is originating, but parents do have the option to send their kids to a hand-selected private school at their own expense if this is what they desire,” the post began.

“The purpose of public education in public schools is not to teach kids only what parents want them to be taught. It is to teach them what society needs them to know. The client of the public school is not the parent, but the entire community, the public.”

A screenshot of the post can be seen below.

“We have deleted a post that ignored the important role parents play—and should play—in Michigan public schools. Parents need to have a say in their children’s education, end of story,” a new post on Monday read. “The post does not reflect the views of Michigan Democrats and should not be misinterpreted as a statement of support from our elected officials or candidates.”

The post also came amid a push for a tax-incentivized scholarship program that could be used at private schools.

Former Detroit Police Chief James Craig, who is running for the Republican gubernatorial nomination, said “parents are the true stakeholders” in their kids’ education.

“Parents that expect more out of their local public school, and hold them accountable, should not be told to get out their checkbook and hit the road,” Craig said in a statement. “They have already opened their checkbooks by paying their taxes and deserve high-quality education for their children.”

Metro Detroit businessman Kevin Rinke, also a GOP hopeful for governor, said “this nonsense will end” should he become governor.

“Parents, not bureaucrats, will make the decisions on what’s best for their children’s education,” Rinke wrote.