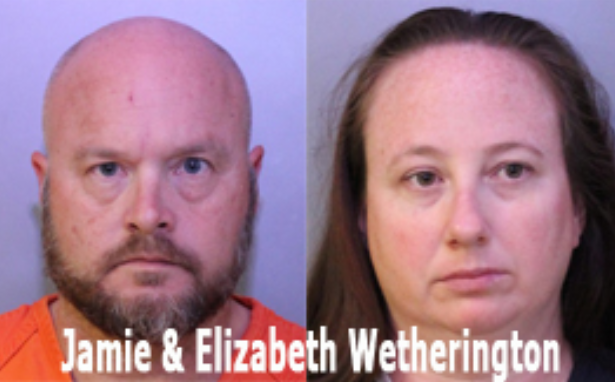 The Polk County Sheriff’s Office announced the arrest of James “Jamie” Wetherington, 45 and Elizabeth Wetherington, 36, both of Mulberry for stealing from Mulberry Dixie Youth Baseball League.

According to officials, during the transition from the former league president (Wetherington) to the current league president, suspicious transactions on the previous Mulberry Dixie Youth Baseball bank account were discovered.  The new president requested a CPA to conduct a forensic audit of the previous account.

Wetherington told the new president to open up a new bank account.

The investigation revealed that James Wetherington was the president of the Mulberry Dixie Youth Baseball League (MDYB) between August 2017 and June 2019.

When he took over the league, another volunteer was on the Midflorida bank account as the treasurer.  In May of 2018, the volunteer treasurer said she had issues with the way Wetherington treated her, including being very argumentative and that he made excuses when asked about providing receipts for his transactions.  The volunteer decided to remove herself from the league.

Wetherington then added his wife, Elizabeth Wetherington to the account and appointed her as Vice President and Treasurer to the league. This violated the bylaws of the league since a third authorized signer on the account was required.

Detectives learned the fall league was cancelled from November 2018 through January 2019 due to current members trying to vote James Wetherington off the board as President because of conflicts they were having with him. These on-going incidents caused the parents to remove their children from the league and enroll them into other baseball leagues. Attempts were made to restart the league for the spring of 2019, but James Wetherington ultimately announced on social media that he cancelled the spring league. Parents requested their money back and they were slowly reimbursed.

During the time the spring league was cancelled, James and Elizabeth Wetherington were using the MDYB bank cards.  They were purchased items on Amazon, Home Depot, restaurants, and at different gas stations. Detectives determined after interviews with all the board members who were active while James was President, there were $7,984.72 in fraudulent transactions, including from : (1) Amazon.com, (5) Walmart, (6) Sam’s Club, (5) Home Depot,

Both have been charged with Scheme to Defraud, Fraudulent use of Credit Card, Grand Theft.

CORRECTION: The initial indicated Little League, but occurred with a Dixie Youth Baseball League program, NOT associated with Little League Baseball, Incorporated and has been updated to better reflect the youth sports league. – BBJ, The Dispatch