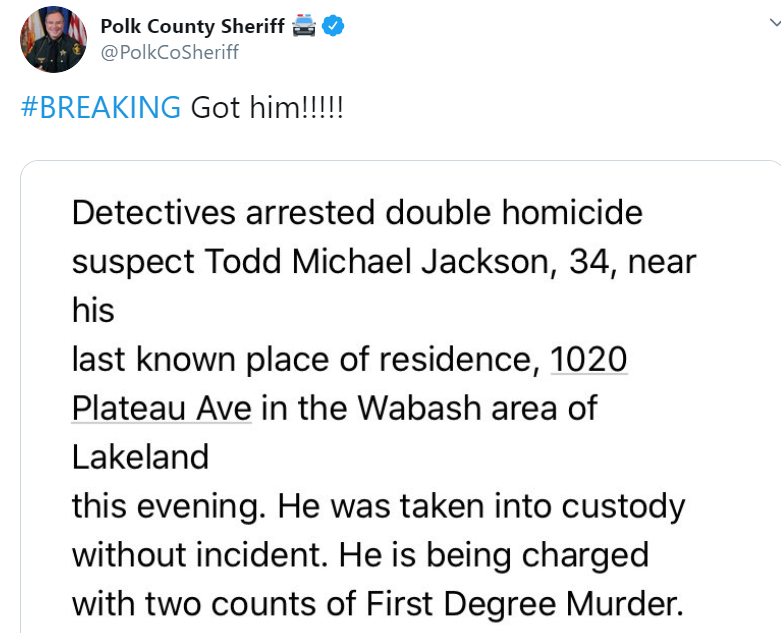 The Polk County Sheriff’s Office announced the arrest of 34-year-old Todd Michael Jackson for the double murder of a Haines City couple.

On Friday, Raymond Mark Cline, 33, and his wife, Crystal Ann Cline, 37, were found in a swamp behind their home at at 3500 Windy Hill Road. Authorities said the two had not been able to be reached by anyone since Feb. 21.

Jackson was arrested near his last known place of residence, 1020 Plateau Ave in the Wabash area of Lakeland. He was taken into custody without incident. He is being charged with two counts of First Degree Murder.

Through their investigation, detectives learned that Raymond Cline regularly scrapped metal up until February 21, 2020, which is the last time he scrapped any metal.

Based on statements from witnesses and interviews, detectives learned that 19-year-old Amberlyn Nichols, also of 3500 Windy Hill Rd., attempted to sell Raymond Cline’s truck in recent days. She told at least one witness that she knew that Raymond and Crystal had been murdered and that their bodies were dumped behind their residence in a swampy area.

Detectives learned that Nichols alleged that Raymond Cline stole money from Todd Michael Jackson, who Amberlyn says is her stepfather. She said that Todd Jackson shot the two victims in the head as they slept at the crime scene. The two victims’ bodies were drug out of the home and dumped in the swamp located behind the residence.

Detectives have also interviewed a person who claimed he/she was at the residence when Raymond and Crystal Cline were murdered. The witness said he/she observed Todd Jackson pointing a firearm (handgun) at the victims and then shoot both victims.

Detectives have interviewed both Amberlyn Nichols and Larry Waters, Jr.—both admitted that they had knowledge of the murder, knew that both Raymond and Crystal were deceased and their bodies dumped behind the house, and did not report this to law enforcement. Nichols admitted that she was attempting to sell Raymond’s truck.

Nichols and Waters were arrested and will have their first appearance this morning.

2020-03-08
Previous Post: The Electoral College, the National Popular Vote and the Save Our States project
Next Post: Franciscan Center in Tampa hosts 50th Anniversary Celebration with ‘Words to Live By’ luncheon fundraiser