An international team of 18 researchers, including Kristian Anderson, Ph.D., from the Scripps Research Institute in La Jolla, have determined that the earliest cases of COVID-19 in humans arose at a wholesale fish market in Wuhan China in December 2019 in a new study published in Science-entitled The Huanan Seafood Wholesale Market in Wuhan was the early epicenter of the COVID-19 pandemic

They linked these cases to bats, foxes and other live mammals infected with the virus sold at the Huanan Seafood Wholesale Market in Wuhan.

“These are the most compelling and most detailed studies of what happened in Wuhan in the earliest stages of what would become the COVID-19 pandemic,” says Stephen Goldstein, Ph.D., a co-author of the study led by senior author Kristian Anderson, Ph.D., from the Scripps Research Institute in La Jolla and first author Michael Worobey, Ph.D., from the University of Arizona. Goldstein is a post-doctoral researcher in the department of Human Genetics at U of U Health. “We have convincingly shown that the wild animal sales at the Huanan Market in Wuhan are implicated in the first human cases of the disease.”

Interestingly, you may remember one Dr Anderson as part of a series of emails with Dr. Anthony Fauci very early in the pandemic. In an Wall Street Journal Op-Ed from last year, the author summarizes:

On Jan. 31, 2020, shortly after the SARS-CoV-2 genome had been decoded, Kristian Andersen, the five virologists’ leader, emailed Dr. Fauci that there were “unusual features” in the virus. These took up only a small percentage of the genome, so that “one has to look really closely at all the sequences to see that some of the features (potentially) look engineered.”

This remarkable email establishes that the Andersen team’s initial reaction was to suspect that SARS-CoV-2 had been engineered in a lab. Their subsequent letter doesn’t adequately explain how they overcame this impression.

Back to the Science study and it’s key findings:

Moving forward, the researchers say public officials should seek better understanding of the wildlife trade in China and elsewhere and promote more comprehensive testing of live animals sold in markets to lower the risk of future pandemics. 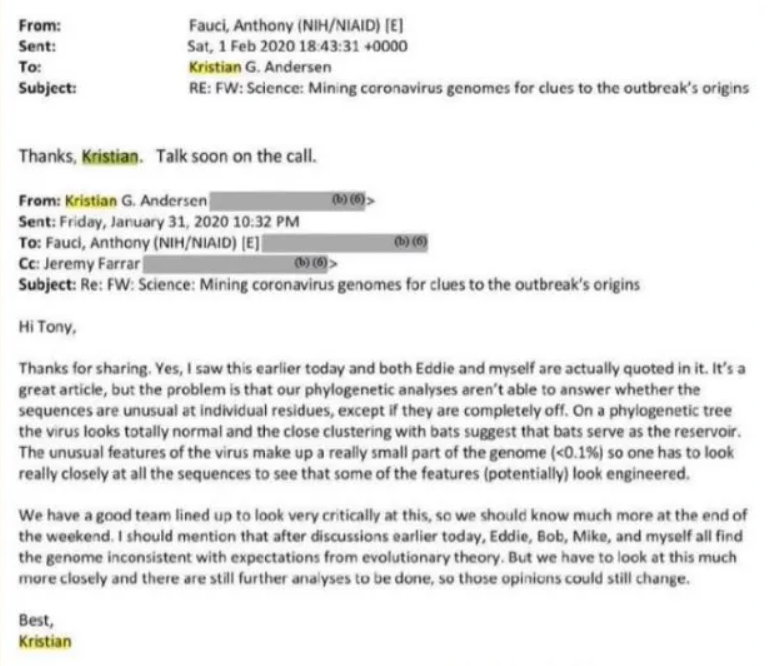