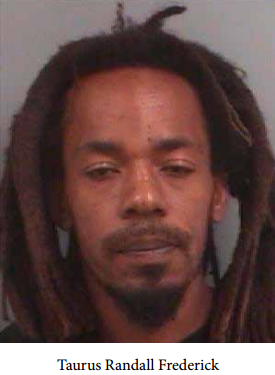 The St. Petersburg Police Department, in conjunction with the U.S. Marshals Fugitive Task Force, is asking for the public’s assistance in attempting to locate a man wanted for first degree murder.

On June 20, 2016, at 22nd Avenue South and Dr. MLK Jr. Street South in St. Petersburg, Taurus Randall Frederick, b/m, 2/16/1978, and Jeron Anthony Davis became involved in an argument. Frederick followed Davis in a car and then ran Davis over. Frederick abandoned the car and ran on foot from the area. Davis was pronounced dead at the scene.

Frederick is 5-07 in height and weighs 140 pounds. On June 23, 2016, a warrant was issued for the arrest of Frederick for first degree murder in the death of Davis.

Anyone with information regarding the location or whereabouts of Frederick is asked to call the U.S. Marshals Fugitive Task Force at 727-639-1167.