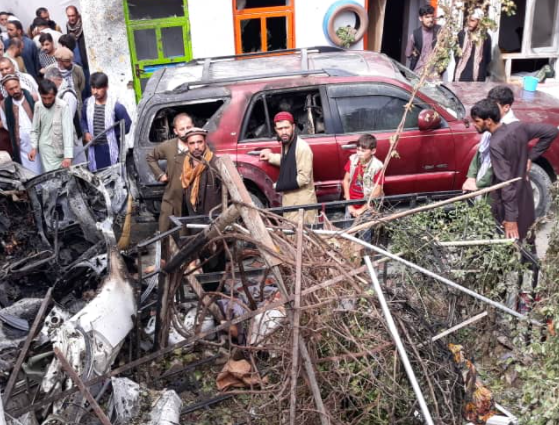 Defense Secretary Lloyd Austin on Monday instructed the US Air Force to conduct a 45-day review of the Aug. 29 drone strike in Kabul, admitting that it was not a “righteous strike” that prevented an Islamic State bomb plot, as originally claimed.

Austin tasked Air Force Secretary Frank Kendall with selecting a senior officer “to study the degree to which any policies, procedures or targeting mechanisms may need to be altered going forward,” he said.

The review also will “take a look at what levels of accountability might be appropriate and if so at what at what level,” Austin said.

“I am now convinced that as many as 10 civilians, including up to seven children, were tragically killed in that strike,” McKenzie added. “Moreover, we now assess that it is unlikely that the vehicle and those who died were associated with ISIS-K, or a direct threat to U.S. forces.”
News show talking heads, scholars and military “experts” defend the drone us as warfare which will minimize the physical risk to military personnel as well as civilian casualties.

Sen. Rand Paul of Kentucky earlier this month questioned to Secretary of State Antony Blinken, asking “Was he an aid worker or an ISIS-K operative?”

“You’d think you’d kind of know before you off someone with a predator drone,” Paul said.

Paul underscored that there’s been a problem with US drone strikes killing civilians under multiple administrations, warning that it leads to “blowback” that serves as a recruiting tool for extremist groups.

“If you killed an aid worker on accident … do you think we’re better off because of that?” Paul said, adding that it doesn’t send a message of strength to the world.
Several news outlets use the term, “tragic error” while McKenzie said the civilians “were tragically killed”

Here’s the current message: “IT WAS TRAGIC.”

No, it was murder.

Maybe the translation through the political speak is that the military acts with less risk: no DEAD SOLDIERS in American flag covered coffins and no video footage of innocent Afghanis exploding when the missile detonates.

Remember the old, old, really old video of Afghanis clinging to airplanes, trying to flee their homeland as the U.S. withdrew their troops. It may seem like a distant memory, but the outrage and American sentiment was one of horror.

Now imagine a clear image or picture of this story: Military says they are going to kill a terrorist with a drone strike, then admits the collateral damage was his family, including some kids. Then a bit later, the Secretary of State and military leaders they “didn’t know” the victim was an aid worker and NOT and ISIS member at all.

My report for @bbcnews about the last US act of war before their withdrawal from #Kabul, a blunder that killed 3 adults and 7 of their children. The man speaking is Emal Ahmadi, whose brother was wrongfully targeted as an ISIS bomber. Fred Scott camera & edit, prod Firle Davies pic.twitter.com/4EEXJtaLSm

The press and politicians demonized President Trump’s authorization of a drone strike to kill Iranian Maj. Gen. Qassem Soleimani, resulting in polls showing 27% of Americans thought Trump should be charged as a war criminal.

Soleimani was widely known as a key figure in Iran’s funding and support of terrorist efforts in the Middle East. There was NO QUESTION who was the target, but the State Department and military claims they did not know.

Where is the outrage?

Where is the anti-war left?

Jane Fonda spoke at the anti-war rally following the Soleimani assassination as protesters held signs that read “No war or sanctions on Iran!” and “U.S. troops out of Iraq!”

Is the standard to only oppose Republican president and their foreign policy while ignoring the drone strikes and the clear murder of innocents around the world?

In 2015, The Intercept released the drone papers, detailing the ramp up of drone use during the Obama administration.

“We’re allowing this to happen. And by ‘we,’ I mean every American citizen who has access to this information now, but continues to do nothing about it,” the article read.

During the two Obama terms, there were over 540 documented drone strikes and the administration “vastly expanding and normalizing the use of armed drones for counterterrorism and close air support operations in non-battlefield settings—namely Yemen, Pakistan, and Somalia.”

The Council on Foreign Relations estimated 3,797 people, including 324 civilians were killed under Obama. He once told senior aides in 2011: “Turns out I’m really good at killing people. Didn’t know that was gonna be a strong suit of mine.”

Less than a year into his presidency, the Biden administration may try to claim a foreign policy victory with their Afghanistan withdraw, but the execution of these innocent lives should not be forgotten and Americans must call for accountability through resignations and criminal hearings.

At least 10 people, including children, were killed in a US airstrike in #Kabul on Sunday, local residents say. US officials said they had targeted a car carrying Daesh suicide bombers. pic.twitter.com/4oltmedJDA

Now imagine if this happened in the #Trump administration

US admits #Kabul strike killed 10 civilians and not Islamic State militants | US military | The Guardian https://t.co/NrjeDguSXm