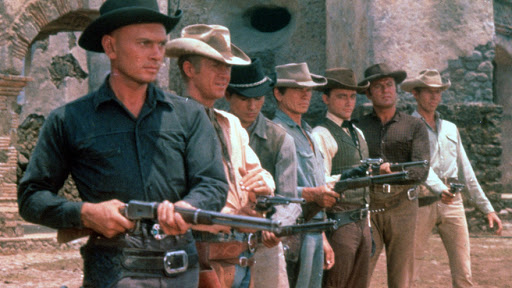 MAGNIFICENT SEVEN: An all-star cast elevates the film’s legacy into the overrated category

A gang of bandits, led by Calvera (Wallach), raids a poor Mexican village for food and supplies, killing a villager and then warning them not to bury the man. A gunslinger (Brynner) fends off the attackers to earn the villagers trust and endorsement to create a team to battle the outlaw bandits.

The men are talented fighters, coming from different backgrounds (McQueen’s gambler Vin Tanner) and for different reasons (Coburns’ Britt who just loves the challenge), uniting to protest the village and train them to protect themselves.

Seven has a legacy built around the great cinematography, performances and humors, but is a clean, long-winded film, weak on suspense and engagement.

What the film does exceedingly well is kill off key players.

Like Psycho, made in the same year, big Hollywood getting killed off may have shocked audiences at the time, but these actors were NOT superstars yet, so it’s a big difficult to understand the massive popularity of the film.

Brynner is forced into cool cowboy role, dressed in all black and remains calm in the face of danger and chaos. McQueen looks great and does cement his ability to carry screen time, but the character has little dialogue in a film juggling so many interesting characters.

Some of the best scenes are delivered by the nameless Mexican actors, particularly Jorge Martínez de Hoyos, who plays Hilario and get some good speeches and inspired the villagers to fight for their personal property.

Seven is not as grand as some John Ford and John Wayne films. Seven is not edgy as interesting as the Dollars Trilogy. Seven never showcases the best from any of these legendary actors.