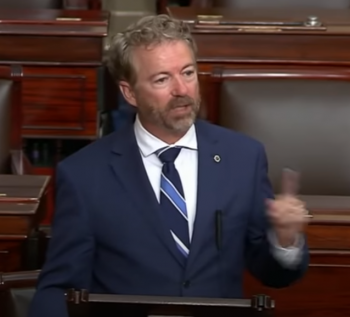 “The federal government has made it far too easy for government agencies to take and profit from the property of those who have not been convicted of a crime. The FAIR Act will uphold the Fifth Amendment and ensure government agencies no longer profit from taking American citizens’ property without due process. It will guard against abuse while maintaining the ability of courts to order the surrender of proceeds of crime,” said Sen. Paul.

Among its reforms, the FAIR Act eliminates “equitable” sharing, which currently allows state law enforcement officers to turn seized property over to federal officials for forfeiture — and get up to 80% of the proceeds of the forfeited property.  This bill ensures that law enforcement cannot ignore state law.

It also restores the principle of “innocent until proven guilty” and requires clear and convincing evidence, placing the burden on the government to show that a property owner consented to his property being used in a crime by a third party (or that the property owner was willfully blind to the criminal activity).

It would ensure property owners have the opportunity to receive representation in all civil forfeiture proceedings, remove the profit incentive, reform IRS seizures, enact strong reporting requirements, award treble damages to a successful plaintiff, eliminate IRS and Customs carveouts for basic protections otherwise granted by federal law, and eliminate all references to administrative seizures in the U.S. code.

That last reform would mean that seized property cannot be simply presumed “guilty” without a neutral arbiter such as a judge determining whether it should be permanently taken from its owner.

The FAIR Act will uphold the Fifth Amendment and ensure government agencies no longer profit from taking American citizens’ property without due process.

It will guard against abuse while maintaining the ability of courts to order the surrender of proceeds of crime.

NBC ‘VERIFICATION UNIT’ GETS GOOGLE TO PULLS ADS OFF THE FEDERALIST, ZEROHEDGE

2020-06-30
Previous Post: Florida COVID-19 surge: Looking at some of the major counties
Next Post: Jesse Ventura for President? Attempts to draft the former Governor in the Green Party